The pleasing appearance of Shree Krishna is beautifully described in many of our religious scriptures . Before he leaves Vrindavan he is described as an ever enchanting cowboy , a master flute player , the one who could change the course of rivers by his sweet flute sound . His body is described to be so soft and delicate as a kid . But when he leaves Braj Bhoomi , he enters into political and worldly affairs , his behaviour changed and so also his looks. The mischievous cowboy had now turned into a responsible ruler of Dwarika , the leader of Yaduvansh , popularly called Dwarikadhish.His life was now filled with responsibilities and he had also realised the greater cause for which he was born.

There are two aspects in which his looks can be describes , one is the childly look ,which captivates the heart of devotees , the other is the one as Dwarikadhish Krishna , as a friend of Pandavas and ruler of Mathura

When lord appeared infront of his father Vasudev and mother devaki , what was witnessed by both of them is clearly described in Bhagwat Purana as;

Translation;-Vasudev then saw the newborn baby whose eyes were similar to a lotus flower, and in his four hands he bore the four weapons shanka, chakra , gada and padma.On his chest was the mark of Srivatsa,which is only on the avatars of Vishnu . On his neck was the bright shinning Kaustubh gem. Dressed in yellow, his body was black in colour like a dense cloud which appears before heavy rain, his fully grown hairs were scattered , his head was wonderfully decorated with a helmet and in his ears he wore earing with precious gems.He was decorated with a brilliant belt, armlets, bangles and other ornaments, appeared very wonderful.

His neck is just like a conchshell! His eyes are so beautiful, as though they themselves are encountering the beauty of a lotus flower. His body is just like the tāmala tree, very blackish. His head is protected with a canopy of hair.

Krishna as a kid possessed 64 qualities which could attract even the enemy of Krishna towards him.
Regarding the attractiveness of Kṛṣṇa’s bodily beauty and the sound vibration of His flute, in the Tenth Canto, 29th Chapter, 37th verse, of Śrīmad-Bhāgavatam, the gopīs address Kṛṣṇa as follows:

“Although our attitude towards You resembles loving affairs with a paramour, we cannot but wonder at how no woman can maintain her chastity upon hearing the vibration from Your flute. And not only women, but even stronghearted men are subject to falling down from their position at the sound of Your flute. In fact, we have seen that in Vṛndāvana even the cows, the deer, the birds, the trees-everyone-has been enchanted by the sweet vibration of Your flute and the fascinating beauty of Your person.” 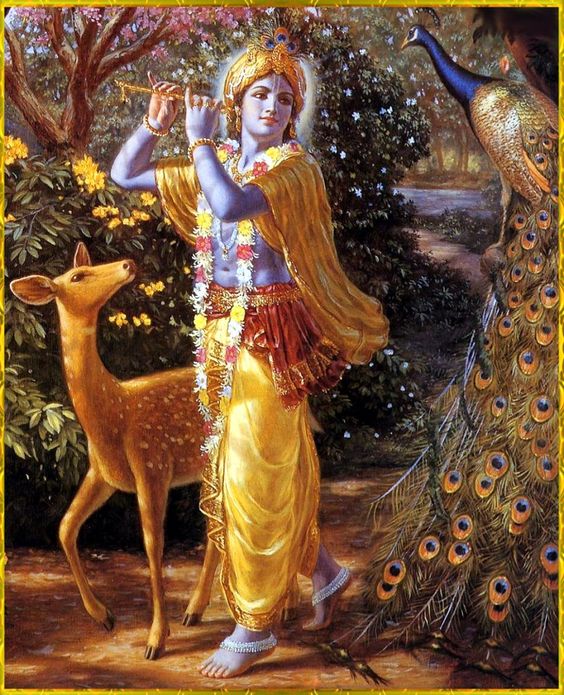 Krishna in his later period of life is also referred as yogeshwar, meaning the master of all senses. Krishna left Vrindavan leaving behind all of his loved ones including Radha . This was a period when he witnessed a complete change in his thinking and lifestyle . Krishna had grown into a strong warrior , probalbly the most powerful warrior physically in Mahabharata. His physical appearance is described as follows :-

The torso is like a bull’s head – with very wide shoulders and chest, tapering down to a slim waist. The arms have been described as shaalapranshumahabhuja – like two huge Shaal trees on either side of the bull’s head torso.

Ruskin Bond mentions a similar beautiful imagery in The Angry River. He says that the peepal leaf represents the physique of Lord Krishna – wide chest and shoulders and a slim, tight waist.

An enchanting smile plays on His lips, giving a glimpse of teeth that put the most lustrous pearls to shame; His moon-like face framed with dark black curling locks of hair, fine as the feathers under a crow’s wings.The special beauty of Krishna’s body was His mild smiling, His restless eyes and His world enchanting songs. These are the special features of this age.

He appears before His pure devotee in His original form as a beautiful young boy with the beauty of blooming youth, of dark complexion that is more effulgent than a million suns.